PORTRAIT OF THE ARTIST IN JAPAN 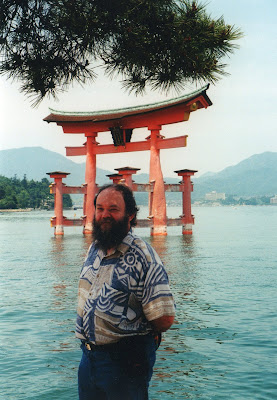 Many of our customers may already be familiar with the French Impressionist painter Jean Pierre Dubord as a selection of his works are offered for sale on the Japanese Tex-style website.

Born in Rouen in 1949, he has lived all his life in Normandy. Whilst very well known in France he has also made successful inroads into the American and Japanese art markets. Japan has had a particular influence on his life from his very first visit. Prior to this Jean Pierre knew little about this country and it's rich heritage. Of course he was aware of the influence of Japanese culture and woodblock prints on the early French Impressionists. Claude Monet was a collector, he painted Camille Monet in Japanese Costume (La Japonaise) in 1876. Edgar Degas and Eduard Manet also had a fascination with this oriental style.

Jean Pierre's first trip to Japan was in July and August 1996 when he was invited to attend three exhibitions of his own works and those of other French artists. The first was in Nara ( The House of Exhibitions) and then to Kyushu with shows in Nobeoka and Akata. These exhibitions were very successful and led to over thirty more shows in the following years. He travelled extensively to Kobe, Osaka and Tokyo. There were two shows in Sapporo and one in Otaru. Here in Hokkaido his translator was asked by many Japanese people if he was Russian which he found very amusing. 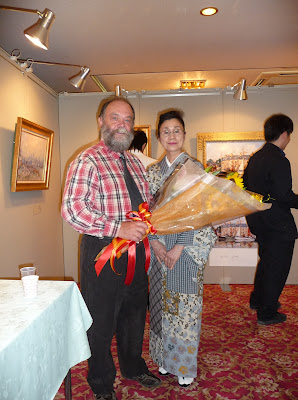 With shows in Hiroshima, at the university, he visited the Peace Museum and the famous Miyajima Torii gate which is often captured in his paintings. The gate is situated close to the famous Itsukushima shrine (a Shinto shrine residing on the island of Itsukushima popularly known as Miyajima in the city of Hatsukaichi in Hiroshima prefecture)

The view of the gate in front of the island's mount Misen is classified as one of the three famous views of Japan (the other two being Matsushima bay in Miyagi prefecture and Amanohashidate, a sandbar located in Kyoto) all three have been depicted by Hiroshige in his famous views of the sixty provinces.

The gate is made of painted camphor wood which is decay resistant. Whilst it only appears to be floating at high tide, when the tide is low, it is approachable by foot. It is common practice for visitors to place coins in the cracks of the legs and to make a wish. It is ideally suited for impressionist paintings since the vivid reds reflect in the water and a free standing architectural structure of this kind is quite unusual. 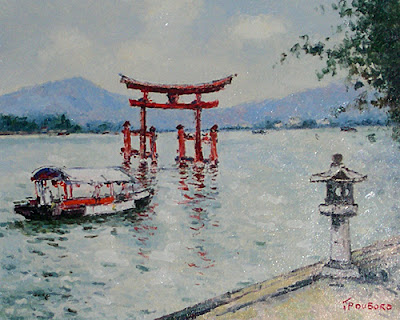 During his trips Jean Pierre discovered Japanese history and the helpful staff at the Enatsu Gallery explained the stories of Yoshitsune, the 47 Ronin and the Soga Brothers. He found the spirit and the arts of the samurai very interesting, although it was difficult reading and his Japanese at this time was rudimentary, now sixteen years on, it would be more than satisfactory. I think in talking with him, the Tale of the 47 Ronin (Chushingura) is his favourite. He has many books and woodblock prints on this subject. Jean Pierre is an avid collector of Japanese prints, illustrated books, Japanese art, swords, helmets and armour. He is particularly interested in antique Japanese dolls and also kimono, obi and jinbaori. Japanese furniture (from the shops in Kyoto) and even a large stone lantern have made their way by boat to his home in Normandy. On his trips to Japan he has had the opportunity to paint, one of his favourite places in Kyoto is the famous Kiyomizu temple, often featured in his work. 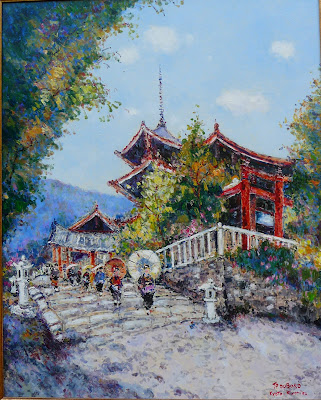 Jean Pierre tells me, this summer in Brittany there have been many exhibitions about Japanese woodblock prints and their influence on French Impressionists, for example Henri Riviere and Mathurin Meheut. One gallery in Paimpol is interested in showcasing Jean Pierre's work including those inspired by his various travels around Japan. 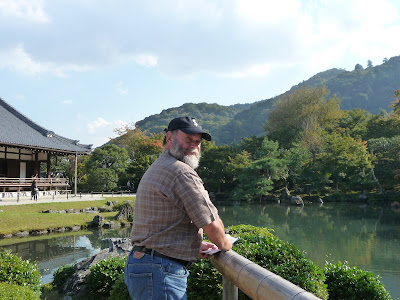 News just in : "Dreams of Japan" two exhibitions showing simultaneously on two sites in the Pinacotheque de Paris comparing the work of Vincent Van Gogh to that of Hiroshige, 3rd of Oct 2012 - 17th March 2013

"I envy the Japanese for the enormous clarity that pervades their work. It is never dull and never seems  to have been made in haste. Their work is as simple as breathing and they draw a figure with a few chosen lines with the same ease, as effortless as buttoning up one's waistcoat"    Vincent Van Gogh